Congratulations to the winners of the III All-Ukraine photo and video competition of the national project “Safe Country”!

On November 11, 2020, the results were summed up and the winners of the III All-Ukraine competition of photo and video works of the national project “Safe Country” were announced. Due to the epidemic situation, the event took place online. The record of the award and all the works of the winners you can find on the YouTube channel “Safe Country” http://www.youtube.com/c/Безпечнакраїна.

The International Charitable Foundation “Assistance to Victims of Road Accidents” together with the Ministry of Education and Science of Ukraine and the Motor (Transport) Insurance Bureau of Ukraine in the framework of the national project “Safe Country” for the third year in a row holds an all-Ukraine photo and video competition among children and youth. Over the years, we have received thousands of works that emphasize the indifference of our youth to all components of security in society, the problems of injury and violence among children, express their desire to overcome these problems and live in a safe country.

Two more interesting topics were added to the competition – “Inclusion in educational institutions” (a separate special topic submitted by the Ministry of Education and Science of Ukraine in cooperation with the International Foundation “Lumos”) and “Studio video work”, which would cover the broadest possible aspects of life safety. Topics “Youth for Road Safety” and “Combating Child Bullying in Educational Institutions” were still available.

This year, the competition received more than a thousand works, the authors of which were students, pupils of preschool and out-of-school educational institutions, students, cadets, teams of school and amateur TV studios.

We would like to announce that following the results of the voting, the following works won the honorary prizes of the III All-Ukraine competition of photo and video works of the national project “Safe Country”:

IN THE NOMINATION “YOUTH FOR ROAD SAFETY” (PHOTOS)

IN THE NOMINATION “YOUTH FOR ROAD SAFETY” (VIDEO)

IN THE NOMINATION “AGAINST BULLYING IN EDUCATIONAL INSTITUTIONS” (PHOTOS)

IN THE NOMINATION “AGAINST BULLYING IN EDUCATIONAL INSTITUTIONS” (VIDEO)

IN THE NOMINATION “INCLUSION IN EDUCATIONAL INSTITUTIONS“

IN THE NOMINATION “STUDIO VIDEO WORK”

I-st place – “We said no to bullying”, amateur studio work of students of 7B class of Kharkiv gymnasium №13;
II-nd place – “Dear friends, Earth is waiting for the touch of your hands…”, the collective work of the ecological search group of Selidovo secondary school (head Mishchenko AM);
III-d place – “Anyone can be a superhero”, authors Malanchuk Maria and Malanchuk Anastasia, members of the studio “First Class TV” (Dolyna, Ivano-Frankivsk region);
Online voting  – “STOP bullying. Good things begin with you! ” (1758 votes), students of 6B class of Kharkiv Secondary School of I-III grades №157.

SPECIAL PRIZES OF THE COMPETITION

Due to the huge number of good works worthy of victory, the organizers of the competition decided to award separate special prizes to those whose works were liked by the members of the jury and caused the most discussion about their celebration. Among the works that will receive special prizes from the jury were: 1) “STOP gadget”, author Maria Skrypkar, 17 years old, State Vocational and Technical Educational Institution “Chernivtsi Vocational Lyceum of Services”;
2) “Broken things can be replaced, but a broken life never!”, author Sofia Plaksina, 12, a student of Tokmatskaya Secondary School №1;
3) “Put on a helmet to save your life!”, author Kolesnyk Daria, 12 years old, Municipal Out-of-School Educational Institution Center for Tourism and Excursions of Student Youth “Traveler” (Kryvyi Rih). 1) video work “Inclusive education in educational institutions”, author Polina Shein, a student of 10th grade Lyman Secondary School I-III centuries. №5, Donetsk region.
2) video work “Inclusion is a story about goodness, love and mercy”, author Oleksyuk Anhelina, 14 years old, graphic design group “Original Things” out-of-school educational institution of the Center for Children and Youth Creativity Horishnioplavnivska City Council of Poltava region. We emphasize once again that you can view all the works of the winners, as well as the actual broadcast summarizing the results of the competition, on the YouTube channel “Safe Country” http://www.youtube.com/c/Безпечнакраїна.

The organizers of the competition and members of the jury sincerely congratulate all the winners and prize-winners of the competition, wishing them inspiration, creative and new achievements. We regret that this year we cannot personally present our winners with their prizes and gifts, share with them the joy of victory, hear feedback and emotions. But all the gifts are already waiting for their heroes! We hope everyone will like them and they will be useful for further talent development! 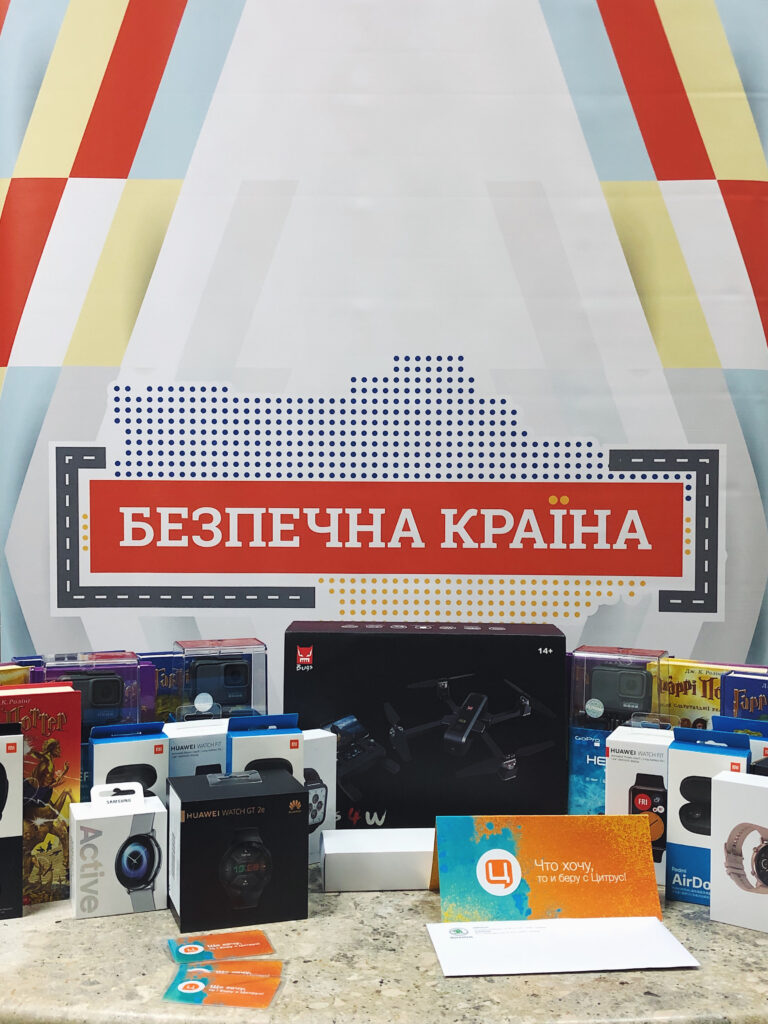 On this occasion, we would like to express our sincere gratitude to our regular, as well as new partners and sponsors who supported the competition, participated in the evaluation of works and helped prepare gifts for our winners – Motor (Transport) Insurance Bureau of Ukraine, Ministry of Infrastructure of Ukraine, State Security Service of Ukraine, the Ministry of Education and Science of Ukraine together with the International Fund “Lumos”, LLC “Eurocar”, the official distributor of Skoda cars in Ukraine, LLC “SHINE-Ukraine”, the company “BIKO”.

We would also like to express my special gratitude for the comprehensive support of the competition of the Committee on Transport and Infrastructure of the Verkhovna Rada of Ukraine.

Dear participants of the III All-Ukraine competition of photo and video works of the national project “Safe Country”!
And those who won, and those who are only on the way to new achievements!

The organizers and members of the jury once again sincerely thank all those who submitted works, who participated in their preparation – parents, leaders, children – for your participation, indifference, creativity, effort and perseverance. Your work is unique, inimitable, and of course, will not go unnoticed. They are stored in our fund, on our website. We often broadcast them on our information resources, demonstrate them as an example for future competitions, and use them to work with children and youth.

Always believe in yourself, create and implement new ideas. Every year we are waiting for you at our competition. Good luck!